Huzzah, it’s summer! Why not celebrate your (relative) freedom by binging some of these awesome TV shows?

Dwayne “The Rock” Johnson was born on May 2nd, 1972. Johnson originally began his career as a professional wrestler, but soon became 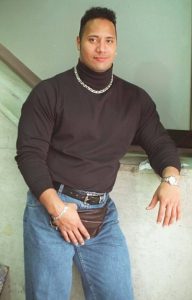 known for his acting career. Johnson generally acts in action or thriller movies; however, one notable exception to this is his performance as Maui in Disney’s Moana.

Outside of his wresting and acting careers, “The Rock” is also known for being part of several popular memes. Whether it be related to his nickname, the very specific genre of movies he acts in, or the iconic 1990’s-era photo pictured below, Dwayne “The Rock” Johnson has become celebrated within pop culture and has created a persona that last for decades to come.

Here are some of Johnson’s films that we have in our collection: