AFI-Discovery Silverdocs presents:Growing Up FemaleA film by Jim Klein and Julia ReichertAFI Silver Theater and Cultural CenterSilver Spring, MDAmerican University School of Communications adjunct professor, Julia Reichert invites everyone to a special screening of her first film (made with Jim Klein), Growing Up Female.The film has been restored and is screening this Thursday, September 15, … END_OF_DOCUMENT_TOKEN_TO_BE_REPLACED 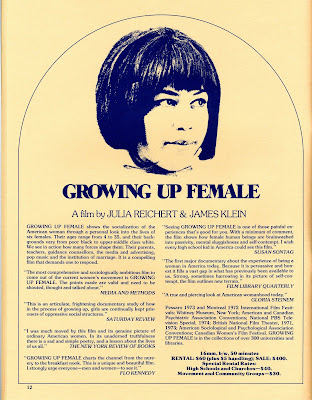 AFI-Discovery Silverdocs presents:
Growing Up Female
A film by Jim Klein and Julia Reichert
AFI Silver Theater and Cultural Center
Silver Spring, MD
American University School of Communications adjunct professor, Julia Reichert invites everyone to a special screening of her first film (made with Jim Klein), Growing Up Female.
The film has been restored and is screening this Thursday, September 15, 2011 at the American Film Institute in Silver Spring.

Growing Up Female is the very first film of the modern women’s movement. Produced in 1971, it caused controversy and exhilaration. It was widely used by consciousness-raising groups to generate interest and help explain feminism to a skeptical society. The film looks at female socialization through a personal look into the lives of six women, age 4 to 35, and the forces that shape them–teachers, counselors, advertising, music and the institution of marriage. It offers us a chance to see how much has changed–and how much remains the same. Purchased by more than 400 universities and libraries.

“We shot it in Spring of 1970 and first showed it in 1971. I am grateful to New York Women in Film and Television for the grant to make the restoration…. I have added a special treat, a short film made in 1969, Up Against The Wall Miss America. It was made by the women of New York Newsreel. Both of us filmmakers will be there to celebrate and to talk with the audience about the film, and about that era.” –Julia Reichert

Here are some Julia Reichert films currently available to watch in Media Services:

Thursday, September 8, 201111:00 am – 1:30 pm The Mud BoxLower Level University LibraryAll AU faculty members are invited to drop in between 11am and 1:30pm to meet new faculty and re-connect with colleagues from across campus, chat with library faculty who support your teaching and research, locate CTRL services that have moved to the … END_OF_DOCUMENT_TOKEN_TO_BE_REPLACED

All AU faculty members are invited to drop in between 11am and 1:30pm to meet new faculty and re-connect with colleagues from across campus, chat with library faculty who support your teaching and research, locate CTRL services that have moved to the Library, and learn about CTRL faculty development opportunities.

Read one of the many recent articles on Arnost Lustig:Prague Post, NY Daily News, ABC News, Variety The following Memorandum was sent to the AU Community by Phyllis Peres, Interim Dean of Academic Affairs yesterday, March 2, 2011. I regret to inform you of the death of Arnost Lustig, professor emeritus of literature, who passed … END_OF_DOCUMENT_TOKEN_TO_BE_REPLACED 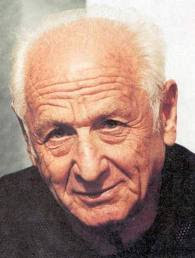 The following Memorandum was sent to the AU Community by Phyllis Peres, Interim Dean of Academic Affairs yesterday, March 2, 2011.

I regret to inform you of the death of Arnost Lustig, professor emeritus of literature, who passed away on February 26, 2011, in Prague, after a long illness. He was 84.

Arnost was a renowned Czech Jewish author whose novels, short stories, plays, and screenplays drew on his experiences as the survivor of three concentration camps. Set against a backdrop of genocide and pain, his writing was filled with moments of morality and humanity. He refashioned his story of survival in “Darkness Casts No Shadow,” a largely autobiographical tale. “I met so many very beautiful people during those years and most of them died,” he once said. “The only way to bring them back to life is to write about them. This is my responsibility.” Despite his past, he was known for his optimism. “If a man ceases to feel life is a miracle,” he said by way of explanation, “he kills himself.”

His most renowned books are A Prayer for Katerina Horowitzowa (published and nominated for a National Book Award in 1974), Dita Saxová (1962)), Night and Hope (1957), and Lovely Green Eyes (2004). Dita Saxová and Night and Hope have been filmed in Czechoslovakia. He won wide acclaim for his work. He was twice awarded the National Jewish Book Award and in 1994, he received a literary award from the American Academy of Arts and Letters for exceptional accomplishment. In 2009, he was among the finalists for the Man Booker International Prize and was awarded the prestigious Czech Franz Kafka Prize the year before. He also was one of three writers who received an Emmy award for the script of the PBS film “The Precious Legacy,” about treasures of Judaica stolen by Nazis for the planned “Museum of an Extinct Race.” He was honored for his contributions to Czech culture on his 80th birthday in 2006. In 2008, he became the eighth recipient of the Franz Kafka Prize.

Arnost was born in Prague in 1926. As a Jewish boy in Czechoslovakia during World War II, he was sent in 1942 to the Theresienstadt concentration camp from where he was later transported to the Auschwitz concentration camp, followed by time in the Buchenwald concentration camp. In 1945 he escaped from a train carrying him to the Dachau concentration camp when the engine was mistakenly destroyed by an American fighter-bomber. He returned to Prague in time to take part in the May 1945 anti-Nazi uprising. After the war, he studied journalism at Charles University in Prague and then worked for a number of years at Radio Prague, where he covered the 1948 Arab-Israeli war.

He worked as a journalist in Israel at the time of its War of Independence where he met his future wife, Vera, who at the time was a volunteer with the Haganah. Also an author, Vera wrote of her family’s fate during the Holocaust in a collection of poems. Arnost was one of the major critics of the Communist regime in June 1967 at the 4th Writers Conference and gave up his membership in the Communist Party after the 1967 Middle East war to protest his government’s breaking of relations with Israel. However, following the Soviet-led invasion that ended the Prague Spring in 1968, he and his family left the country, first to Israel, then Yugoslavia and later in 1970 to the United States. He joined the faculty in the Department of Literature at American University in 1973 and taught there until his retirement in 2003, when he returned to live full time in Prague. He was given an apartment in the Prague Castle by then President Vaclav Havel.

Lustig is survived by a son, Josef, and a daughter, Eva.