Check out this guest blog post, which ran earlier this week in Washington Post’s College Inc. It’s about the unfortunate incident which occurred earlier this week in Ohio and it mentions two AU affiliates. On Tuesday, the owner of a private exotic animal preserve released his captive beasts, then killed himself. Ohio law enforcement officers … END_OF_DOCUMENT_TOKEN_TO_BE_REPLACED 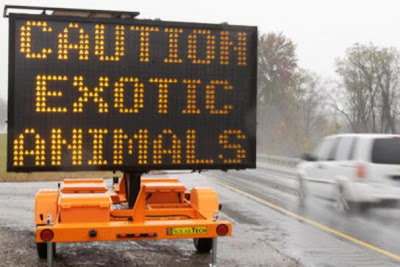 On Tuesday, the owner of a private exotic animal preserve released his captive beasts, then killed himself. Ohio law enforcement officers spent the following day tracking and killing the animals, as residents cowered in their homes. The spectacle of tigers and bears loose in Midwestern yards captivated the cable-television news cycle.

Here, for some perspective on those events, is a guest post from Chris Palmer and Angeli Gabriel. Palmer is director of American University’s Center for Environmental Filmmaking and author of the Sierra Club book “Shooting in the Wild: An Insider’s Account of Making Movies in the Animal Kingdom.” Gabriel is an anthropologist, filmmaker, and master’s candidate at American University.

The massacre of nearly 50 exotic animals from a game farm in Ohio is a tragic example of why wild animals (exotic or otherwise) should not be kept as pets.

To put it simply, wildlife should remain in the wild. When they are locked up in cages and forced into confinement, their suffering and stress is immense. They cannot lead healthy lives when taken from their natural habitat and placed in what’s usually a cramped and poorly maintained game farm or facility – it’s unfair, cruel and unnatural.

The owner of the massacred animals, Terry Thompson, kept all sorts of animals – bears, tigers and monkeys, among others – locked up in cages. Apart from the claustrophobic living conditions (compared to living in the wild), wild animals are sometimes purchased by naive people who severely underestimate the special needs of the animals and even mistreat them. In fact, Thompson had previously been convicted of animal cruelty and was suspected of animal neglect.

What makes this tragedy even worse is that people like Thompson are in demand by filmmakers and photographers. In many wildlife documentaries and photos, the animals featured are not as “wild” as they seem. In fact, they come from game farms (similar to Thompson’s) that house and provide wildlife on demand. Basically, creatures that were intended to roam freely can be made available to anyone with the right amount of money. For example, Thompson was hired to bring three lion cubs to a photo shoot with Heidi Klum in New York City. With transactions like that, business can be good for game farm owners.

By leaving wild animals in their natural habitats, tragedies like the massacre in Ohio can be prevented. For the sake of the animals and for the safety of humans, wildlife should remain as nature intended: free.