There are a lot of great films to check out at the AFI-Discovery Channel Silverdocs Documentary Film Festival this summer. Here are two of them: (please excuse the size of this embedded video) SOUL POWER Jeffrey Levy-Hinte USA, 2008, 93 MINUTES Before Muhammad Ali and George Foreman’s 1974 boxing match in Zaire, the biggest names … END_OF_DOCUMENT_TOKEN_TO_BE_REPLACED

There are a lot of great films to check out at the AFI-Discovery Channel Silverdocs Documentary Film Festival this summer. Here are two of them:

(please excuse the size of this embedded video)

Before Muhammad Ali and George Foreman’s 1974 boxing match in Zaire, the biggest names in R&B as­sembled for a three-day music festival. Jeffrey Levy-Hinte takes this never-seen footage and shows us the talents of James Brown, Bill Withers, B.B. King, the Spinners and top African acts such as Miriam Makeba and Orchestre Afrisa International.

Though most of the black American performers were visiting Africa for the first time, many felt they had returned home. After years spent rooted in the civil rights movement, the journey prompted them to explore roots of another sort, and their days leading up to the festival were spent as if in an alternative universe, where Black Power took on an entirely new reality and meaning. The festival and film were financed by a Liberian investment group that became hindered by legal disputes, and consequently the film footage remained in the can for more than two decades. Eventually, the disputes were settled and the footage was transformed into the 1996 Academy Award-winning film When We Were Kings.

Unfortunately, the historical concert didn’t make the cut. The editor of KINGS, Jeffrey Levy-Hinte, understood that the concert footage was worthy of a film unto itself and resurrected it from the editing-room floor. SOUL POWER is the dazzling result. With never-seen footage of the performances and new sections with Ali, the film plays like a glorious time capsule. SOUL POWER is a beautifully constructed lost object that creates more than mere nostalgia: It allows one to fully enter into the world of 1974 and captures an event so extraordinary that we dare not forget it.

The Nine Lives of Marion Barry 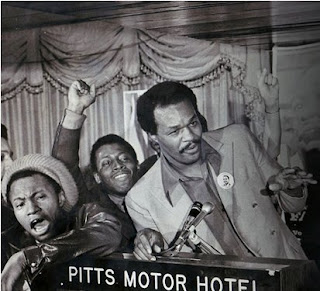 Dana Flor and Toby Oppenheimer, Director/Producer of “The Nine Lives of Marion Barry”, were on The Kojo Namdi Show this afternoon on WAMU. Here’s what was said on Kojo’s site:

Some people call him the “mayor for life.” Others think he’s been in the political limelight for far too long. Whether you love him or hate him, Marion Barry has been a key force in the city’s politics for four decades. We’ll talk with a pair filmmakers who recently explored the complicated relationship between Barry’s legacy and D.C.’s identity.