Happy Halloween! In honor of the upcoming holiday, today we present to you the story of a special Peace Corps-themed whodunnit. Author Rosemary Yaco served in the Peace Corps in Togo from 1983-1986. [1] She then served as a Fulbright professor in Togo before working as the Director of the English Language Program, which was at the United States Information Agency American Cultural Center in Benin, until 1996. [2] From 1998 to 2006, Yaco published a series of four murder mystery novels whose main character, Lynne Lewis, solved crimes in the West African settings where Yaco had worked. [3] The first book in this series, titled Murder in the Peace Corps, reflected Yaco’s service in Togo. It drew on a tragic event that happened during her time as a Volunteer, while also involving several twists, turns, and an enigmatic group of suspects.

Rosemary Yaco’s 1983 Peace Corps group included Jennifer Rubin, a young woman who started her own project to help Togolese women make more efficient earthen stoves, reducing the work needed to gather firewood for cooking. [4] In 1984, she realized that the daughter of the family she rented an apartment from, a close friend, was stealing her belongings. When Rubin mentioned this to the father, he turned his daughter into the police, who beat her until she confessed. A few days later, when she was released, she contacted two men from another village, who killed Rubin. [5] The two men who killed her were sentenced to life in prison. [6] This senseless death of a Peace Corps Volunteer clearly impacted Yaco, as can be seen in her book. Murder in the Peace Corps begins when Lynne Lewis hears word of a fictionalized account of this murder, and Lynne’s sadness and hope to find a resolution grounds the mystery in the shadow of Rubin’s death. [7]

Just as in real life, the Peace Corps and Togolese government in Murder in the Peace Corps quickly resolve this first murder. However, when Lynne and the other Peace Corps Volunteers assemble to grieve and obtain more information about the murder, the Ambassador of the United States to Togo dramatically dies in front of them. Lynne quickly sets off on a cross-country adventure, involving both help and hindrance from the American Embassy, her fellow Volunteers and supervisors, and the local Togolese people. Rosemary Yaco weaves intrigue, romance and surprise into her plot, and the mystery is resolved through several unexpected twists. In addition, she includes details that clearly come from her own Peace Corps experience, such as the delicious food Lynne eats or the types of housing she lives in. However, not all of these specifics are delightful. Not unlike many other thrillers, the sexual orientation of multiple characters is used to signal “deviance” and suggest the characters have malicious or jealous motives because of their suppressed sexual orientation.  Yaco’s Peace Corps Volunteers also sometimes get angry at the cultural differences between the United States and Togo, assuming theirs are always superior, or they exoticize the Togolese they come into contact with. Yaco also underscores the isolation and difficulty adjusting that can occur when Volunteers have isolated posts, or the irritation which comes when they don’t get along with each other. [8]

Rosemary Yaco’s Murder in the Peace Corps is a mystery that uses more than just suspense to spin a tale. By incorporating real-life experiences, Yaco transports readers to Peace Corps service in 1980’s Togo, accompanied by a plucky heroine and an intriguing set of supporting characters. Interested readers can find the digitized book online in Yaco’s collection within the Peace Corps Community Archives, here.

[6] “3 ARE CONVICTED IN TOGO OF KILLING AMERICAN: Three residents of the West African country of Togo have been found guilty of killing a 23-year-old Peace Corps worker from Oneonta, N.Y. in June, a spokesman for the Togo mission to the United Nations said yesterday,” The New York Times, September 20, 1984, https://www.nytimes.com/1984/09/20/world/3-are-convicted-togo-killing-american-three-residents-west-african-country-togo.html, accessed September 28, 2022.

[7] Summary taken from Yaco, Murder in the Peace Corps.

[8] Summary taken from Yaco, Murder in the Peace Corps.

Place of Service: Nsanje (in Malawi)

At the time of writing, the 2022 midterm elections are approaching, and many Americans (this author included) are making their preparations to vote by mail. For decades, Peace Corps Volunteers have been among the voters who need to use mail-in ballots. This included Susan Anderson, who served from 1968-1972 in Malawi and Mali. Before she even reported for training, the Peace Corps sent her an article, included in the January 1968 edition of the Peace Corps Volunteer, to explain the process of voting overseas. Written by Elizabeth White, a Peace Corps employee and former Volunteer, the article “How to vote in ‘68” attempted to lay out both the importance of and obstacles to voting. 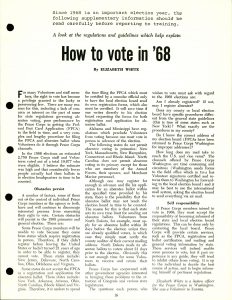 “How to vote in ’68,” by Elizabeth White. This article highlights the difficulties of voting overseas for Peace Corps Volunteers.

White’s article is only meant to be a brief introduction to mail-in voting for Volunteers who were or would be overseas for the primary or general elections that year. It includes encouragement to raise the very low number of Peace Corps Volunteer votes from 1964 and provides key information geared towards first time voters. (In 1968, the minimum voting age was still 21, so a large number of Volunteers would not have voted before starting their service.) However, White’s main point was the self-responsibility of each Volunteer- every state and locality had slightly different rules, and most greatly restricted the participation of overseas or otherwise absentee voters. For example, six states required voter registration in person, so any unregistered Volunteers from these states who were already training or serving could not vote at all. Seven states did not accept the Federal Post Card Application (the federal forms to permit voting overseas), so Volunteers from these states were warned not to waste time filling out these forms and contact their state and local governments directly. Five states had either partial or total restrictions on mail-in voting for primaries. Alabama and Mississippi directly prohibited mail-in voting if a Volunteer had never voted in person before. White also acknowledged that there were several other restrictions and deadlines on a state-by-state level. She noted that, at the end of the day, Volunteers had to decide for themselves if all of these restrictions were too prohibitive to attempt voting. [1]

In the years since, federal and state governments have made changes that have made it easier for Peace Corps Volunteers to vote by mail during their service. While many states still have various levels of restrictions for voting by mail, several of these laws provide exceptions for those overseas, including Volunteers. [2]  The federal government has passed several different rounds of voting-related legislation, which has also smoothed this process. Most important was the Uniformed and Overseas Citizens Absentee Voting Act, passed in 1986, and amended by the Military and Overseas Voter Empowerment Act in 2009 (though only fifteen states have fully implemented the amendment). This legislation allows members of the U.S. military and other U.S. citizens living abroad to vote in federal elections and receive their ballots forty-five days before an election. [3]  Today, the Peace Corps continues to help Volunteers vote, and they include necessary information and forms on their website.[4] While access to voting overseas and in the Peace Corps has changed since 1968, the importance of voting has not. So don’t forget to cast your vote this November in person, absentee, or by mail!

[2]  Information from “Absentee Ballot Rules,” Vote.org, https://www.vote.org/absentee-voting-rules/. Accessed September 27, 2022. For anyone looking for voting resources, Vote.org is a great place to start.